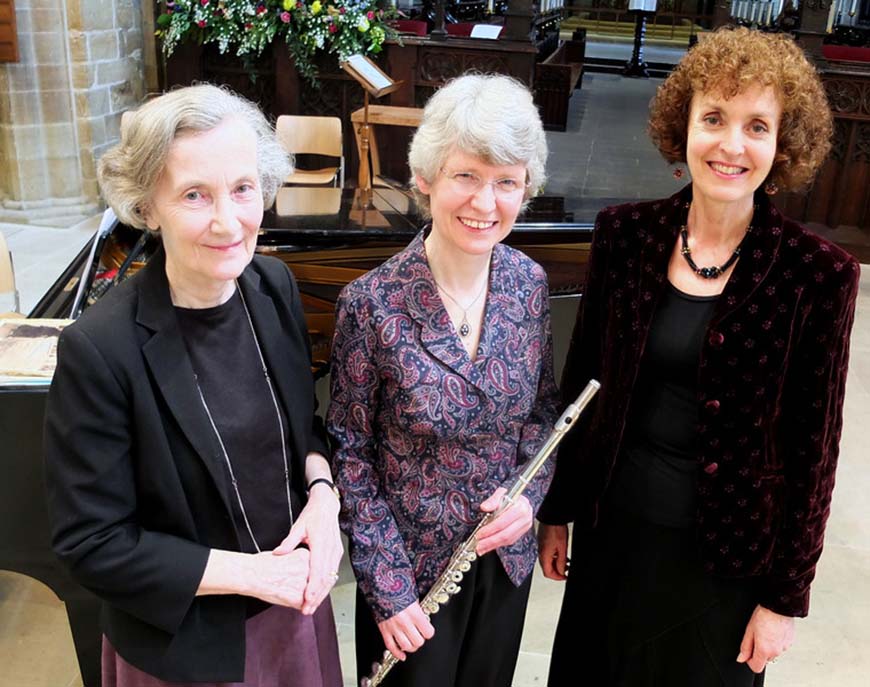 Already colleagues, we became a formal ensemble in 2007, producing a CD commissioned by Peter Brown and recorded in Fairfax House in Castlegate. From that Mozart-based extravaganza we planned lively programmes from mid-Baroque works utilising Edwina’s expertise with appropriate flutes, Amanda’s love of early music, and my experience of early pianos: we then covered more Classics, hugely enjoyed the late nineteenth century flute and vocal repertoire and gradually pooled our resources into quite a library of twentieth century works, from Elgar (at the request of the Elgar Society) through WW1, the thirties, Britten, Walton, Madeleine Dring, William Alwyn and Cecilia McDowall amongst very many composers, not forgetting jazz and Flanders and Swann. We specialise in carefully themed programmes in our regular incarnation.

In 2012 I was invited to be pianist for a new collaboration of York-based poets and composers and that quickly involved the ensemble (and temporarily the outstanding young baritone Ben Lindley) in interesting new programme planning. Once established we created a five-concert tour, sponsored by the Ralph Vaughan Williams Trust, in very receptive Yorkshire venues, between the autumn of 2016 and May of last year. We gave several premiers as well as performing existing new works by these composers. The programmes also contained interesting and unusual British music of the last century and now we look forward to working further with these exciting composers – never a dull moment!