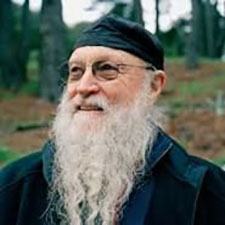 Born in Colfax, California, Riley studied at Shasta College, San Francisco State University, and the San Francisco Conservatory before earning an MA in composition at the University of California, Berkeley, studying with Seymour Shifrin and Robert Erickson. He was involved in the experimental San Francisco Tape Music Center working with Morton Subotnick, Steve Reich, Pauline Oliveros, and Ramon Sender. His most influential teacher, however, was Pandit Pran Nath (1918–1996), a master of Indian classical voice, who also taught La Monte Young and Marian Zazeela. Riley made numerous trips to India over the course of their association to study and to accompany him on tabla, tambura, and voice. Throughout the 1960s he traveled frequently around Europe as well, taking in musical influences and supporting himself by playing in piano bars, until he joined the Mills College faculty in 1971 to teach Indian classical music. Riley was awarded an Honorary Doctorate Degree in Music at Chapman University in 2007.

Riley also cites John Cage and “the really great chamber music groups of John Coltrane and Miles Davis, Charles Mingus, Bill Evans, and Gil Evans” as influences on his work, demonstrating how he pulled together strands of Eastern music, the Western avant-garde, and jazz.

Riley began his long-lasting association with the Kronos Quartet when he met founder David Harrington while at Mills. Over the course of his career, Riley composed 13 string quartets for the ensemble, in addition to other works. He wrote his first orchestral piece, Jade Palace, in 1991, and has continued to pursue that avenue, with several commissioned orchestral compositions following. Riley is also currently performing and teaching both as an Indian raga vocalist and as a solo pianist.