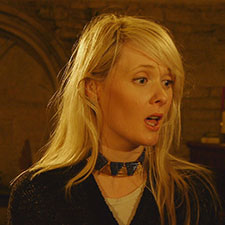 Stef Conner (b. 1983) is a composer whose music forges channels of empathy between people separated by time, space and social situation, with materials drawn from the sounds of language and emotive vocal expression. She studied music at the University of York, graduating with a starred first in 2005, before completing a master’s degree in Jazz Studies. In 2007 she joined the Northumbrian folk group The Unthanks and performed at such venues as The Barbican, Covent Garden Opera House, Glastonbury, Womad, the BBC Folk Awards and the Mercury Music Awards. Her approach to music-making was deeply affected by The Unthanks’ sensitive and honest style of musical storytelling. In 2012 she completed an AHRC-funded PhD in Composition at the University of York. Her recent awards and commissions include the RPS Composition Prize, ISM Composers’ Competition, Bliss Trust/PRSF Composer Bursaries, The Esoterics ‘Polyphonous’ competition and the Making Music/Sound and Music ‘Adopt-a-Composer’ Scheme. Performers of her work include The Kreutzer Quartet, Juice, The Nieuw Ensemble, Cadenza, The Philharmonia Orchestra, John Potter and members of Ensemble 10/10. Two of her pieces premiered at Huddersfield Contemporary Music Festival and she has received performances in York Minster, The Royal Festival Hall, Queen’s College (Cambridge), Cheltenham Festival, Shanghai Oriental Arts Centre and Beijing Conservatory, as well as broadcasts on BBC Radio 2 and 3. She is currently Composer in Residence with Streetwise Opera and performs new music in Babylonian with the Lyre Ensemble.