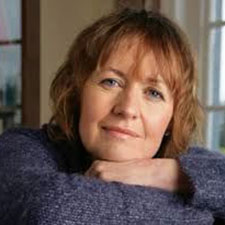 Sally Beamish was born in London. She began writing music and playing the piano at an early age, going on to study the viola at the Royal Northern College of Music. She gave up her life as a London freelance viola player and moved from London to Scotland with baby and husband, and another baby on the way. Her music embraces many influences, particularly jazz and Scottish traditional music. Her orchestral output is considerable and includes two symphonies and a large number of concertos: besides three viola concertos she has written works for violin, cello, oboe, saxophone, trumpet, percussion, flute and accordion. She has written concertos for many soloists including Tabea Zimmerman, Hǻkan Hardenberger and Steven Isserlis. Her music is performed and broadcast internationally, and since 1999 she has been championed by the BIS label, who have recorded much of her work. Recent commissions include a concerto for percussionist Colin Currie, with the Bergen Symphony Orchestra, Scottish and Swedish Chamber orchestra, and Stanford Lively Arts, California. Her string quartet for the Elias Quartet, Reed Stanzas, received its premiere at the 2011 BBC Proms, and has just won the 2012 RPS award in the Chamber-Scale Composition category.

Biographical notes on Sally Beamish taken from the Scottish music centre website, and sleeve notes to the CD of her Violin Concerto, Callisto, and Symphony No.1 by Anthony Marwood, Sharon Bezaly, the Royal Scottish National Orchestra, and Martyn Brabbins.