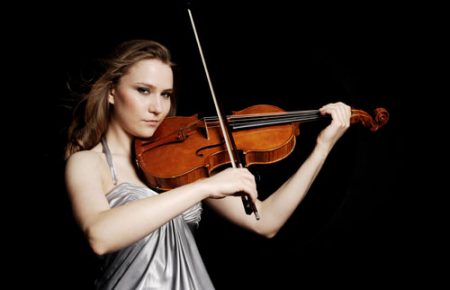 British violist Rosalind Ventris is emerging as one of the most sought after young violists internationally. She performed at the Wigmore Hall’s 2014 viola celebration with Tabea Zimmermann, Garth Knox & Thomas Hoppe, after which the Financial Times remarked: ‘Zimmermann and Ventris sounded like a single being in Bridge’s haunting Lament for two violas.’ She has given recitals at the Royal Festival Hall, Purcell Room, Wigmore Hall, Aldeburgh Festival, Bridgewater Hall, Slovak Philharmonic Bratislava, and Het Concertgebouw Kleine Zaal. At the age of 17, she was the youngest competitor at the 2006 Lionel Tertis Competition, and won two prizes, which led to performing with the European Union Chamber Orchestra at the Emilia Romagna Festival in Italy, and in the UK with violinist Tasmin Little. She was also a prizewinner at the 2013 Tertis Competition (five prizes including Yuri Bashmet’s President’s Prize). She has won awards from the Hattori Foundation, Martin Musical Scholarship Fund, Musicians Benevolent Fund, Kirckman Concert Society, & the Countess of Munster Trust. In 2016 she was selected as a Park Lane Group Young Artist & a Philip & Dorothy Green Making Music Award Winner (AYCA).

Deeply committed to chamber music, Rosalind is a member of Trio Anima (with Matthew Featherstone, principal flute of BBCNOW, and Anneke Hodnett, harp) and the newly formed Albion String Quartet (with Tamsin Waley-Cohen and Emma Parker, violins, and Nathaniel Boyd, cello). She has collaborated with Mitsuko Uchida at Marlboro Festival, the Arcanto Quartett at the Beethovenhaus in Bonn, Gerhard Schultz at the Salzburg Festival, Clive Greensmith, the Aronowitz Ensemble, the Benedetti Elschenbroich Grynyuk Trio, and the Dante and Endellion quartets. For the IMS Prussia Cove, she performed at the Salzburg Festival in 2012 and on the 2013 tour.  She has regularly been invited to attend IMS Prussia Cove Open Chamber Music.

She has frequently broadcast live on BBC Radio 3 ‘In Tune’, and in 2016 she recorded a new work by Rory Boyle on Delphian with Fraser Langton (clarinet) and James Willshire (piano), and a song cycle by Robert Hugill on Navona with Anna Huntley (mezzo-soprano) and Will Vann (piano). Both will be released in early 2017. She has given a number of world premieres by the composer Edwin Roxburgh: Monologue for solo viola at the Royal Festival Hall (2011), Sonata for Viola and Piano at the Purcell Room (2011), and Ricercare at the Wigmore Hall (2012).