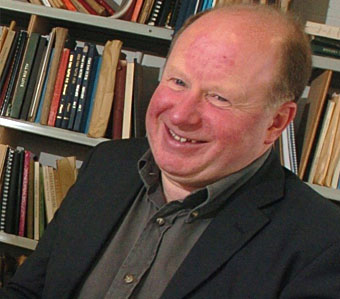 My wife and I called him the White Rabbit. Always looking at his watch. Nervous. Anxious. Always in a hurry. Always trying to catch up with himself. Almost within touching distance of himself. Nearly, almost… close. He was never quite where he needed to be. Where he was always striving to be. If you followed Peter down a rabbit hole, then you had to cling on for dear life. You had no idea where he would take you, lead you, or where or when you would finally emerge. How about starting a contemporary music ensemble (it became PM Ensemble)? Ten years later, after he’d been touring, commissioning and virtually revitalizing the new music scene in Wales, I made the mistake of asking him how it was going. PM needed to develop an educational programme – it would only take another 3 years or so! Peter never arrived. He was always travelling.

I wouldn’t like to deliver his eulogy. I’d have to ask most of the congregation to leave. He met self-importance, pretentiousness and pomposity with their unfailing nemesis – wit. And believe me he could be very funny. He nearly got me thrown out of a concert a few years ago. As we all know, laughter is strictly verboten in the concert hall. Peter’s wit was never meant to wound or hurt, just bring us all down to earth. He pricked a good few balloons in his day. Then there was his selflessness. He ran a music festival for years that commissioned and programmed virtually every living composer in Wales. Except himself of course. Who will now teach me about medieval church architecture, read a renaissance painting for me, point me in the direction of a poet, painter, writer, playwright or historian I’ve woefully neglected. And yes, he knew a bit about music as well.

His music? He was his own severest critic. About 6 years ago he metaphorically tore up his old music and started again from scratch, from first principles. He started writing short piano pieces that were not really meant for public consumption, they were deeply personal studies in the art of discovering expressiveness from simple phrases with limited pitches, harmonies and rhythms. They were frighteningly simple, and yet they worked. From this ruthless exercise he gradually, and sometimes painfully, re-learned the art of composition. I think the results will speak for themselves. But then, I liked the old stuff too!