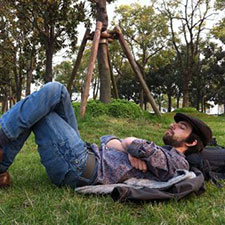 Jonathan’s music reflects a wide range of influences from classical music, folk, jazz, pop and music theatre. He studied composition with Kevin Malone and John Casken at the University of Manchester and recently completed a PhD in composition at the University of York under the supervision of William Brooks. He has since been awarded an HRC Postdoctoral Research Fellowship at York.

He was shortlisted for the Britten Sinfonia Opus 2013 competition with his small ensemble piece, “Slowing, Hanging, Circling” and was selected for the European Composers Professional Development Scheme, which led to performances by the Nieuw Ensemble at the Huddersfield Contemporary Music Festival and the Amsterdam Conservatoire (“Song to the Bare City”, 2012, now available on Zeta Potential). This year Jonathan is one of four composers selected for the LPO Leverhulme Young Composers programme and will receive mentoring from LPO composer in residence, Magnus Lindberg. A new piece for the LPO and Foyle Future Firsts will be premiered on June 10th 2015 at the Queen Elizabeth Hall. Jonathan has also won a place at the International Young Composers Meeting in Holland and will compose for orkest de ereprijs.

Jonathan leads contemporary jazz group ‘Stoop Quintet’, recently selected by Young and Serious to perform in the London Jazz Festival. The quintet’s sound has been characterised as ‘ostinato-esque melodies followed by chaos’ (Blue Flaming Music).  His collaboration with innovative 7-piece band Threads Orchestra, Ranch, was described by All About Jazz as ‘enigmatic and defiant of categorisation’.