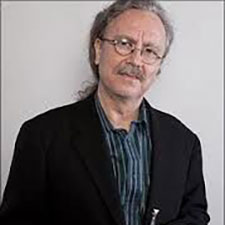 James Dillon (born October 29, 1950) is a Scottish composer who is often regarded as belonging to the New Complexity school. Dillon studied art and design, linguistics, piano, acoustics, Indian rhythm, mathematics and computer music, but is self-taught in composition.

Dillon was born in Glasgow, Scotland. Honours include first prize in the Huddersfield Contemporary Music Festival in 1978, the Kranichsteiner music prize at Darmstadt in 1982, and four Royal Philharmonic Society composition awards; most recently for his nine-composition cycle Nine Rivers. Dillon taught at Darmstadt from 1982–92, and has been a guest lecturer and composer at various institutions around the world. He taught at the University of Minnesota School of Music in Minneapolis, Minnesota from 2007 to 2014.

His major works include choral and vocal music, including the cycle L’évolution du vol (1993) and the opera Philomela (2004), the orchestral works helle Nacht (1987), ignis noster (1992), Via Sacra (2000), and La navette (2001), as well as a violin concerto for Thomas Zehetmair (2000) and the piano concerto Andromeda (2006) for his partner, Noriko Kawai, all showing an ease of writing for large forces. From 1982–2000, Dillon worked on the Nine Rivers cycle, a 3-hour work for voices, strings, percussion, live electronics and computer-generated tape. The epic work was first performed in full in Glasgow, November 2010.