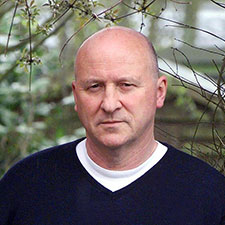 Gavin Bryars, born in 1943, studied philosophy but became a jazz bassist and pioneer of free improvisation with Derek Bailey and Tony Oxley. Early iconic pieces The Sinking of the Titanic and Jesus’ Blood Never Failed Me Yet achieved great popular success.

Since 1986 he has performed, toured and recorded with the Gavin Bryars Ensemble, which now includes singers Anna Maria Friman and John Potter. He has made many recordings for ECM, Point, Philips, Naxos, Decca, and his own label GB Records.

Bryars most recently completed Marilyn Forever¸ a chamber opera for Aventa Ensemble, premiere in Autumn 2013 in Victoria, Canada. Upcoming works include the full length ballet, Pneuma, created with choreographer Carolyn Carlson for the Ballet of the Opéra National de Bordeaux to premiere in March 2014.