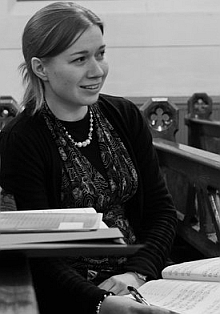 It was during her academic studies that Emily’s excitement for collaborative and theatrical music developed, alongside an interest in community music and a passion for Javanese gamelan. The combination of these influences (all of which lie at the heart of 1v4(v), which will be premiered by the Late Music Ensemble on 1st August 2015) has shaped Emily’s work as a composer, leading her into collaborations with artists whose experience of the world is very different to her own. Emily is particularly interested in exploring the art made by those who are often excluded or disabled by society – something she investigates as one of the founding artists of Engine Room Theatre, a devising company of performers and makers from diverse backgrounds.

Emily has recently been commissioned through the BBC Performing Arts Fund and was one of six composers selected to take part in the 2010-11 Adopt-a-Composer scheme run by Sound and Music, the PRS Foundation and Making Music. Her work has notably received performances at Gaudeamus Muziekweek, the National Concert Hall Dublin, the Glasgow West End Festival, and on BBC Radio 3.