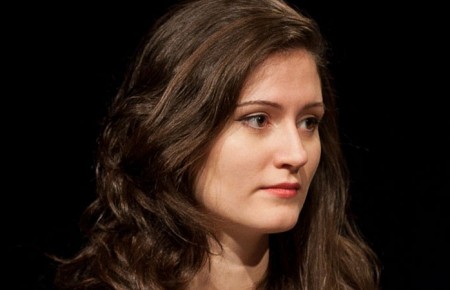 Ana studied for her BA Music (Hons) degree at the University of York, where she was recipient of the Ed Burrell Award for Excellence in Performance. As an undergraduate she performed regularly, as a chorister and soloist, most notably as Maria in West Side Story, and as the soprano soloist in Unsuk Chin’s Acrostic Wordplay and Morton Feldman’s Rothko Chapel. As a member of The 24, the university’s most prestigious chamber choir, she toured China, Hong Kong and Germany and was broadcast on BBC Radio 3 under the direction of Professor Bill Brooks and Director Robert Hollingworth. During her time at the University of York, she also learnt to play the tenor and bass Viol da Gamba, performing in the York Early Music Festival, and developed a passion for composing and arranging. In her final year she was secretary of, and an active performer with, the University’s Chimera Ensemble, the UK’s largest student-led contemporary music ensemble, which performs challenging and little-heard repertoire by mainly living composers.

After leaving York, her first professional appearance was at the Royal Opera House, creating a role with directors Natalie Abrahami and Richard Hetherington. Next year she will commence her postgraduate studies at the Royal College of Music, London.

Her most recent engagements include: a solo recital at the York Late Music Festival with pianist Kate Ledger and poet Lemn Sissay, a recording of French music with i Fagiolini, performing the UK premiere of Luca Francesconi’s Etymo, and various appearances as a chorister in London and Italy, alongside her permanent position as a soprano in the choir of the Carmelite Priory, Kensington. She is one of eight scholars in the National Youth Choir of Great Britain’s 2016-2017 Fellowship Scheme.

Ana is bilingual English and Spanish thanks to her Galician mother and Derbyshire-born father, and speaks Italian, which she studied intensively during a six-month stay in Milan, alongside learning voice privately with a bel canto teacher. She is now based in North London.

Born in Manchester, she received a vocal chorister scholarship to Chetham’s School of Music at the age of 9, studying with Helen Francis and Christopher Stokes. With Manchester Cathedral Choir, she performed on BBC Songs of Praise, sang in several BBC Radio 3 broadcasts, and toured the east coast of the USA and the north of France. Upon leaving Chetham’s in 2006 she joined the Hallé Youth Choir and Orchestra, where she gave her solo debut as the cante-jondo soloist in De Falla’s El Sombrero de Tres Picos with the Hallé at the Bridgewater Hall. With the Hallé Youth Choir, she sang at the BBC Proms at the Royal Albert Hall, and in the summer of 2010 toured to Venice, a trip that included a concert in St. Mark’s Basilica. Other highlights of her time with the choir include performing on UK rock band Elbow’s album Build A Rocket Boys which led to performances on ‘Comic Relief’ and broadcasts on BBC Radio 1, and singing on the Hallé’s highly-acclaimed recording of Elgar’s Dream of Gerontius with Bryn Terfel and Alice Coote.